THE PRINCE, GOVERNOR AND TAPIOCA 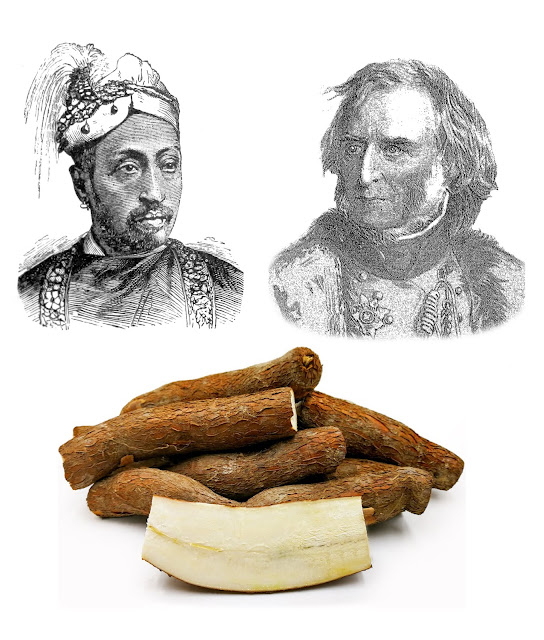 Delicacies prepared from the starchy root of the cassava plant (tapioca) have been an integral part of the traditional Malayalee cuisine for over a century. Once debased as ‘poor man’s food,’ this tuber was introduced in the Travancore State as a popular crop by Maharajah Visakham Tirunal Rama Varma (r.1880-1885) during the last quarter of the nineteenth century. Visakham, the nephew of Swathi Tirunal Rama Varma, was an ardent botanist and promoter of agricultural novelties, also credited to have introduced rubber trees in Travancore.

“Seven-leafed-root - the true potato of India”

How and when did the tuber, a native of Brazil, reach the Kerala coast? No one seems to have a definite answer; however, tapioca was a staple food of the indigenous tribal clans, long before it reached the platter of the Prince. In more recent times, there are references to cassava being grown in Madras Presidency in the mid-nineteenth century. Europeans residing in the Presidency often substituted tapioca for potato, “which, when prepared in a peculiar way, is totally indistinguishable from the potato.”

Around 1870s, while travelling through Madras Presidency, Lord Napier, the Governor of Madras was invited to dine at the house of a certain gentleman. At the dining table, “His Lordship was peculiarly struck at the large size and fine flavour of certain potatoes.” After complimenting the hostess for the sumptuous spread, the Governor enquired about the delicious potatoes served at the meal. To his amazement, the hostess revealed that the dish he relished the most was, in fact, tapioca balls made from tapioca root sourced from her garden (The Athenaeum, 1876).

Soon, the story of Lord Napier’s encounter with tapioca reached Visakham Tirunal. The Prince who was already informed about the benefits of the cassava plant wasted no time in sourcing some from the Royal Botanic Gardens, Kew, London. Some sources mention that the first tapioca plantation in Thiruvananthapuram came up inside the Fort, in the grounds of the Vadakkae Kottaram, where Visakham Tirunal was based as the Elayarajah (Sasibhooshan. M.G., Ariyapedatha Ananthapuri, 2017).

The old-timers recall tales of Visakham Tirunal’s earnest efforts to set up tapioca farms in various parts of the State. When he assumed the gaddi, Visakham Tirunal issued a proclamation with specific instructions on cooking tapioca. It explained in great detail that after cleaning the tapioca, it had to be cooked and the water discarded and the process repeated to remove the bitter taste (Saraswathy Nagarajan, How tapioca came to Travancore, The Hindu, June 27, 2019). However, the majority of residents in the capital initially refrained from consuming the tuber. In order to instil confidence in the minds of the reluctant subjects, Visakham Tirunal ordered the cooks at the royal kitchen to include tapioca to his menu - thus elevating the humble tuber to a sought after delicacy!