REFLECTIONS OF AN OLD STUDENT 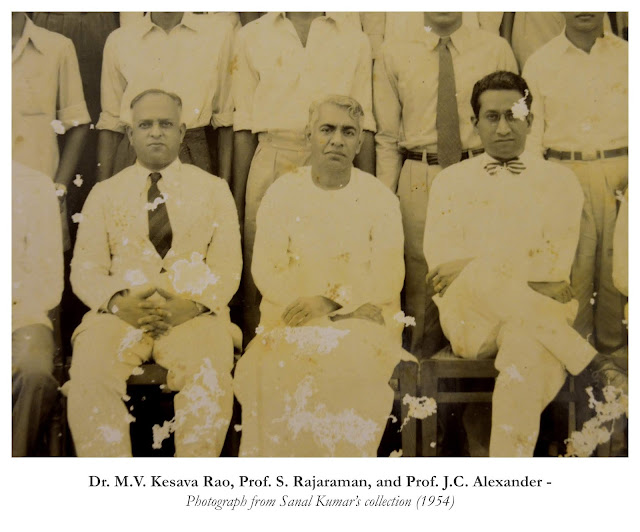 Do memories fade away with age? “No,” says eighty-six year old D. Sanal Kumar, who cherishes crystal clear memories of his student days in College of Engineering, Trivandrum. An alumnus of the Civil Engineering Department (1950-54 Batch), Sanal Kumar was fortunate enough to do both B.Sc. (Engg.) and M.Sc. (Engg.) course from this prestigious institution. Though he returned to his alma mater in the role of a lecturer, Sanal Kumar had to leave soon, to occupy the post of Junior Engineer in the Public Works Department. “I knew that I wouldn’t make a good teacher, but I certainly had some fine mentors here at the college,” recalls Sanal Kumar. “Dr. M.V. Kesava Rao, Prof. S. Rajaraman, Prof. M.P. Mathew, Prof. O.A. Mathew, Prof. M.G. Koshy, Prof. K.C. Chacko and Prof. J.C. Alexander are some of the names etched in my memory,” he adds.

Hailing from a middle-class Ezhava family in Oruvathilkotta, Thiruvananthapuram, Sanal Kumar had to overcome adverse conditions to attain his goals. “I am indebted to my father for providing the best education he could afford. When it was natural for boys to discontinue their school for the perusal of jobs, my father understood the value of education and made sure that his children excelled in studies.” After schooling at N.S.S. School, Palkulangara, Sanal Kumar joined for the Intermediate Course at Govt. Arts College, Thycaud, and finally landed in the College of Engineering, Trivandrum. “The college was located in P.M.G., housed in the buildings formerly used for the Office of the Chief Engineer. M.V. Kesava Rao, head of the Electrical Department was the Principal. Among the other teachers, Rajaraman sir taught Solid Geometry and J.C. Alexander sir taught History of Architecture and Graphics. Once, he asked the students to draw pictures of iconic buildings and render it with colour, the submissions were displayed on the walls of the central hall. J.C. Alexander, who took his post-graduation in Architecture from USA, was supposedly associated with the team involved in the design of the famous Empire State Building, New York City,” recalls Sanal Kumar.

In 1955 Sanal Kumar joined P.W.D. as Junior Engineer, but towards the end of 1959, he returned to C.E.T. to do M.Sc. in Hydraulics (1959-61 Batch). Among the teachers, Prof. K.C. Chacko and Prof. O.A. Mathew who handled classes for M.Sc. course left a lasting impression on him. O.A. Mathew had joined the Civil Engineering Department on deputation from the P.W.D. His thorough knowledge and practical approach to the subject made him popular with students; however, he went back to P.W.D. and was involved in the Thanneermukkam Bund Project. Sanal Kumar himself was involved in some of the ground-breaking projects undertaken by the Public Works Department. “While posted in Thiruvananthapuram, I worked with R. Velayudhan Nair, Engineer, P.W.D., who was associated with various prestigious projects like the construction of Medical College, Thiruvananthapuram. We worked together in the construction of T.B. Centre, Pulayanarkotta. At the same time, Velayudhan Nair was in charge of the construction of the main block of Govt. Ayurveda College and the Martyr’s Column in Palayam. All these buildings were inaugurated in 1958 by Dr. Rajendraprasad, the President of India.” The Martyr’s Column in Palayam was designed by J.C. Alexander. “Velayudhan Nair was perhaps the only man in the department who dared to make alterations in J.C. Alexander’s design sheets. But J.C. sir had complete trust in the engineer and said that Nair’s ‘eraser’ won’t touch his sheets unless there was some problem,” says Sanal Kumar. 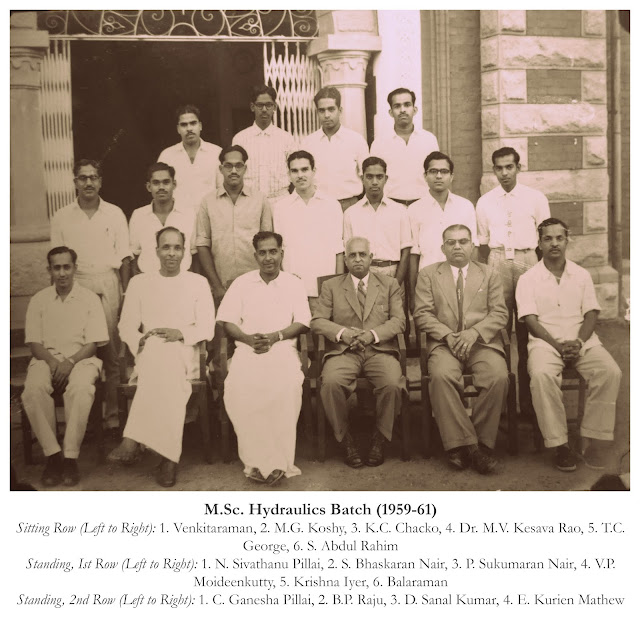 Around mid-1960s, Sanal Kumar was working on the Pampa Irrigation Project and later worked on the Kallada Dam Project (1970-71). “The Pampa irrigation project was particularly interesting,” recalls Sanal Kumar. “The engineers met with a challenge, working on a highly undulated landscape, directing the water from the Sabarigiri Hydroelectric Plant through the valleys for irrigation purpose. A detailed study of the geographic features followed and we made several tunnels cutting across the hills to facilitate uninterrupted flow of water to the farmlands.” Around the same period, he was also involved in the construction of the Engineer’s Pilgrim Centre in Sabarimala. One of his last assignments while in active service was the construction of Co-Bank Towers, an iconic building in Palayam, Thiruvananthapuram.

Sanal Kumar retired from P.W.D. in 1987, while holding the post of Chief Engineer and settled in Oruvathilkotta. “I am still connected with my old college mates, but now that age has restricted us, we don’t see each other that often. However, Sanal Kumar cherishes the celebrations organised by CETAA to mark the golden jubilee celebrations of their batch. On that day he and his batch mates made a journey to the old college building in P.M.G., retracing their steps to the past, the days of carefree student life, and the memories of their favourite teachers.

The students of 1950-54 Batch in front of 'Old CET', photographed during the occasion of their Silver Jubilee celebrations hosted by CETAA: 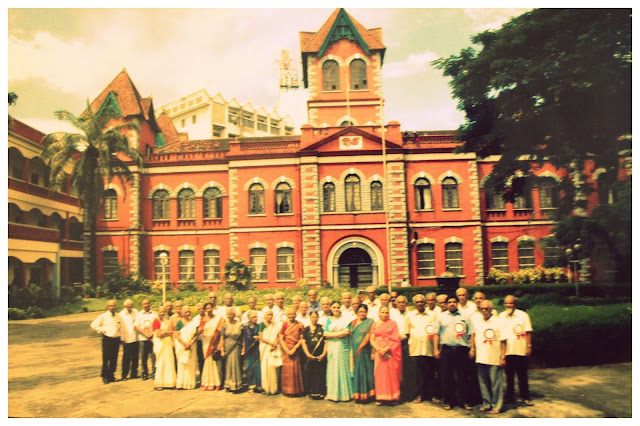 (Write-up based on an interview with D. Sanal Kumar, Chief Engineer, P.W.D. (Retd.), an alumnus of Civil Engineering Department (1950-1954 Batch). All pictures used in the write-up are from the private collection of D. Sanal Kumar.)
Posted by Sharat Sunder Rajeev at Sunday, July 29, 2018 No comments:

'An archetypal South Kerala home', a write-up on Thekkae kottaram in the Padmanabhapuram palace complex, The Hindu, 26-05-2018. 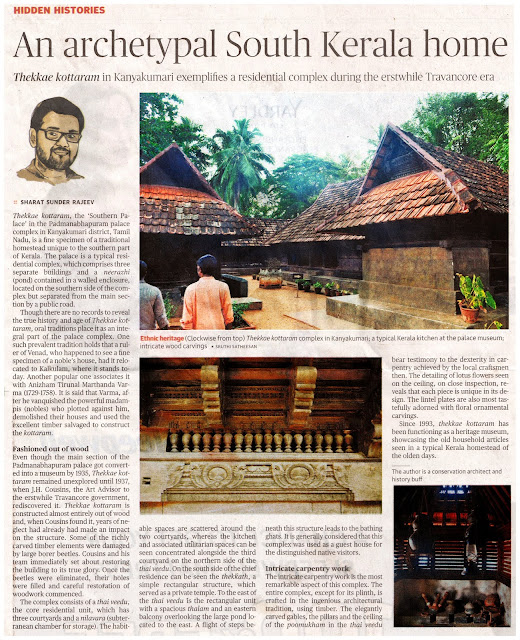 GATEWAY TO THE PAST 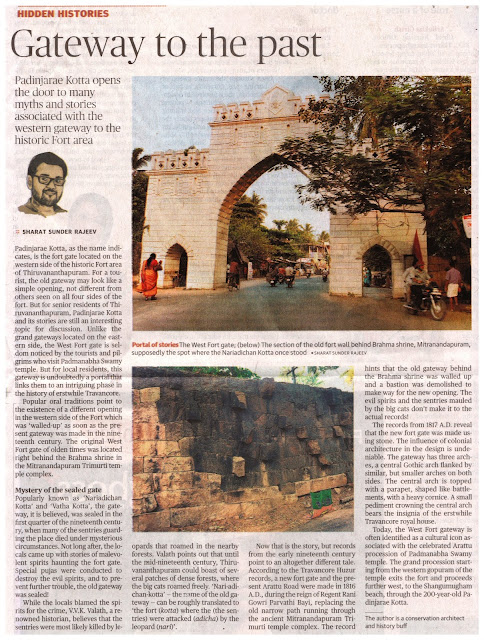 REMAINS OF THE DAY

'Remains of the day', a write-up on Thekkae Putten Veedu, Kalkkurichi, a house constructed by Raja Kesava Das, The Hindu, 28-04-2018. 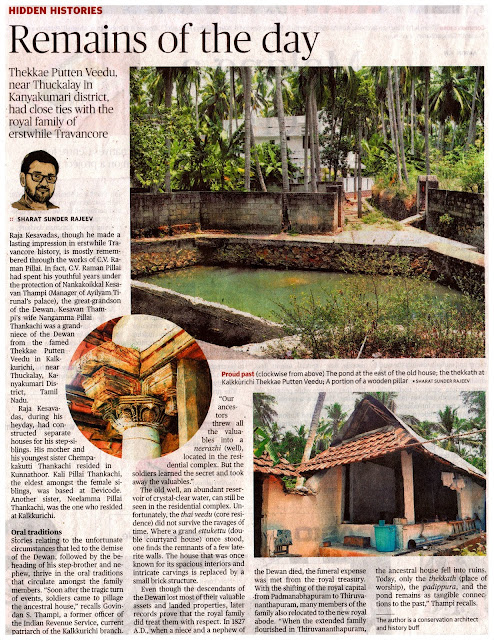 A FAMED ABODE OF A FORMER DEWAN

'A famed abode of a former Dewan', a write-up on Kravilakathu Putten Veedu, the ancestral house of Raja Kesava Das, The Hindu, 31-03-2018. 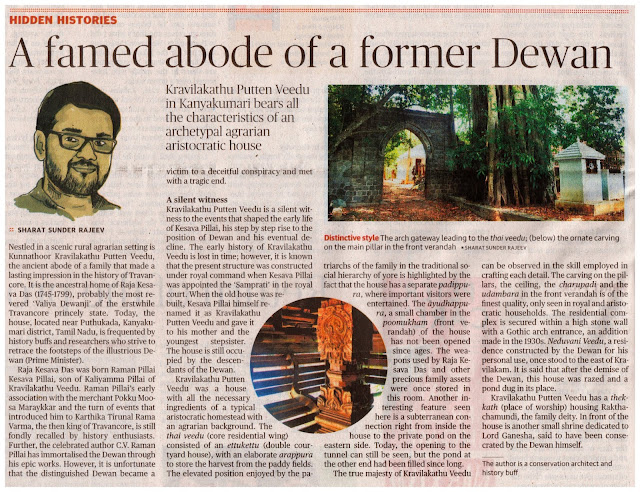